The AGM was attended by 38 members representing 18 sites


We shall publish edited summaries of the above two presentations as soon as they are available.
Part Two:


The minutes of the 2015 AGM having been published on www.abas2014.blogspot.co.uk for an appropriate time (since 2/12/2015), the Committee moved that the minutes be accepted. This motion was accepted.


Matters Arising from the Minutes 2015


External Matters
Essentially Abas acts as the independent voice of Bolton plot-holders
However, Abas exists within a wider allotment community
So in some respects, abas acts as the District level of the National Allotment Society, in NAS terms abas is a “federation”
Above District level, the regional level of the NAS is the NWCAA – this holds quarterly forums at various venues in the North West at which abas is represented and from which our representatives report back
Nationally the NAS provides a range of services (most importantly legal advice and information about government policy) which abas (and individuals and individual societies can tap into). Abas has not to date usually attended the NAS AGM. 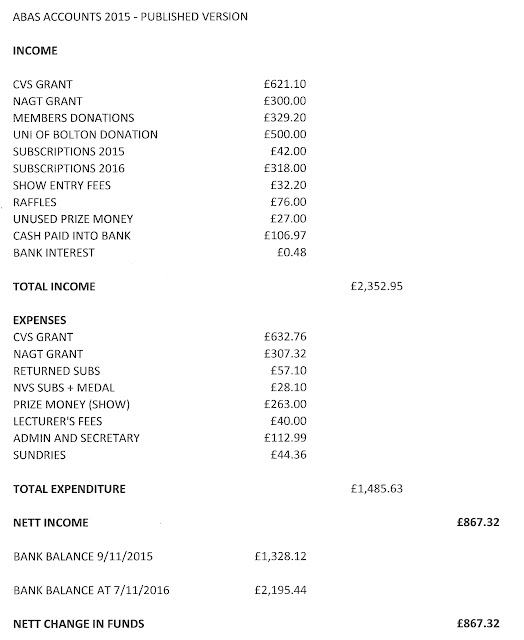 
Competitions
The meeting agreed that:


There was some debate as to the most suitable date, the Committee will discuss this over the winter break.


The members agreed that Abas should organise a programme of talks and lectures in 2017.
It was suggested that an event aimed at new entrants to Allotment Gardening be held with the content concentrating on “the basics”.


Progress Meetings
The meeting mandated the Committee to continue to hold regular Progress Meetings with the Council to address the ‘Site Refresher Matrix’ and try to settle outstanding concerns and issues.


Feedback from the NWCAA Meeting 23/10/2016
Insurance – it had been said at the above meeting that Shield’s quotes may no longer be competitive and that Society Treasurers should get a variety of quotes to ensure that they are getting a good deal. Abas would add that they should be careful to get clear statements of exactly what is being covered and on what terms and conditions to ensure a like with like comparison


There was some mention of limited funds being available from the Membership Rebate made by the National to NWCAA which could be used to provide grants for members. Member Societies may wish to follow this up during the Winter Break. The total amount across the North-West is unlikely to exceed £2000.


As a consequence of the meeting, Jeff Gibson has established a link with the Salford Federation about which we shall speak more under the Greater Manchester Spatial Plan.


However the Greater Manchester Spatial Plan is now inviting developers to suggest sites that may be used for housing
Cllr Cliff Morris has also stated that certain (unspecified green-land) sites particularly in the North of the Borough may have to be made available for housing development if government targets are to be met.


Although no immediate threats to sites have been identified, there remains a risk that if sites become run down, if we have too many vacant plots etc. the Council or developers may see the opportunity to reallocate / requisition those sites for housing. The NAS has publicised the case of the Farm Terrace site in Watford, a well-managed, well-used site taken for development, which demonstrates that none of us can be complacent.
Consequently, abas is entering into meetings to share information etc. with other Federations e.g. Salford and to keep a watch on developments. The meeting endorsed this initiative and supported Jeff in maintaining contact.


We shall be publishing additional comments etc. by Jeff on this blog-site.
On the subject of development, the NAS has been promoting guidelines that more houses should also mean increased allotment provision. A suggestion of 20 plots per 1000 additional dwellings has been made.


The question of how a site secretary should respond if a prospective tenant declines a plot that is offered was raised. This question was raised due to a small number of applicants at the head of the waiting list repeatedly refusing plots meaning that each time a plot becomes vacant the secretary potentially has to go through the offer / refusal process with them before a tenant who will take the plot is reached.


The first step is to enquire whether the applicant still wants a plot (and at the currently nominated site). If not they may be removed from the waiting list. If they wish to remain on the waiting list then the appropriate action will depend both on the circumstances of the tenant and the nature and size of the plot.


If (in the opinion of the secretary) the prospective tenant has a valid reason for declining the plot and these reasons might be overcome in a reasonable period of time, (an example might be a person who is recovering from surgery but who should be fit in say 6 months’ time) then the applicant can stay in their current position on the waiting list. If this is not the case then the applicant should be informed that they will be re-entered on the waiting list at the date they refused the offered plot.


On sites with a reasonably sized waiting list this should ensure that they do not become eligible for a further offer for a suitable period of time, and the process of getting through the waiting list can proceed.


The issue of fires and bonfires was raised. It is clearly stated in the standard tenants’ agreements that a tenant may have a fire on his / her plot for the purpose of disposing of weeds etc. It is also clearly stated that tenants must not cause a nuisance either to other plot-holders or to neighbouring properties. In the Council’s opinion, the nuisance clause over-rides the “freedom to have a fire” clause. Causing a nuisance is a serious Breach of Tenancy. So it is in the interests of tenants to ensure that where arrangements are in place under which fires may be used without causing a nuisance, they abide by those arrangements.


There remains the possibility that a blanket ban on any fires on plots may be imposed if complaints about plot fires continue to be received by the Council.


On the question of Bonfires – Allotment Sites are not considered suitable places for public events after dark, therefore societies should ensure that any Bonfires are strictly for plot-holders and their families, and that plot-holders take direct responsibility for anyone they bring onto the site. Charging for attendance at Bonfires would not be allowed by the Council and fireworks are actively discouraged. All materials burnt on the fire must have been generated on the site, no additional materials may be brought on to add to the fire.


Insurance companies are increasingly treating Bonfires as “Events” and societies may be forced to take out additional “events” insurance (in addition to their standard public liability insurance) if they wish to have even a members-only bonfire. Even where Bonfires are covered by current insurance policies the insurers may impose very onerous conditions if the insurance cover is to the complied with. Societies should check with their insurers. (See also previous abas postings on bonfires)


If a blanket ban is imposed on fires then this would apply to bonfires as well.


Boundary fences / gates are a common area of concern across a number of sites. This links to issues about allotment crime and vandalism which had been raised in Irene Pennington’s opening piece. Irene had also raised questions about site access road maintenance. Mr Russell hopes that staff will be able to get round as many sites as possible over the winter period to assess the situation. However, Council funds can only cover Health and Safety


We would like to remind members of the notes from the abas / council progress meeting which were posted on this site on 24/10/2016. This sets out the situation between now and March/April 2017 as it applies to inspections and mal-cultivations. It also advises an inspection in March 2017. Note that whilst the Council is not anticipating receiving Monthly Reports during the winter period, other issues may be reported by email.


Abas is now going on Winter Break, but if you have any issues please email Dave Jackson on boltonallotments2014@yahoo.co.uk


The next scheduled abas meeting is Monday 13th March 2017