General Update on tenancies, vacancies and waiting lists
MR presented the meeting with a matrix detailing for each site in Bolton (amongst other data)
The number of applicants on waiting lists is 440. However this includes persons who are ‘on probation’ as they are not removed from the waiting list until they have been offered and returned a Tenancy Agreement. It does not include those ‘buddies’ who have signified that they are only interested in taking over the plot on which they are currently helping.


MR expected an increase in vacant plots as 7 plots have been repossessed in the last 10 days under Breach of Tenancy stage 3 notices.
Issues surrounding the submission of signed tenancy registration forms (following successful completion of a probationary period) and the return of Tenancy Agreement Forms (once sent by the Council) remain a concern of both Council and abas secretaries. MR is reluctant to add to secretaries’ workloads under OMAs but as a meeting we felt that the situation would be improved IF tenancy registration forms were returned in the first place to Society Secretaries who could make a copy before submitting them to the authority. Such a practice would ensure that Society Secretaries would have a point of contact for all new tenants.


It is felt that the introduction of ‘probationary’ periods has reduced considerably the number of tenants who give up in the first year which leads to the mal-cultivation process being invoked so the plot may be re-let. Most OMA sites have adopted this practice and of those which didn’t most have now indicated that they will now do so.
MR stated that the numbers of new tenancies let in 2013-2014 was 86, in 2014-2015 79 and in 2015-2016 72.


Tenancy Terminations
There have been issues relating to tenants advising either the Council or the Site Secretary that they wished to terminate their tenancy. This has applied in both directions, secretaries report tenants leaving and the Council not telling them the plot was vacant and secretaries failing to tell the Council (on the monthly report) that a tenant had indicated that they wished to relinquish their tenancy. There has also been a case where a tenant had verbally indicated that s/he wished to leave but then withdrew that resignation after the secretary had advised the Council.


Therefore advice is that whenever possible Secretaries should obtain some document preferably a signed Tenancy Amendment form or perhaps a letter or email from the outgoing tenant stating that the tenant is relinquishing their plot. Failing that they should advise the outgoing tenant that it is the tenant’s responsibility to inform the council. Until such time as the secretary has a document (either as above or notification from the Council that the plot is available for re-letting) the secretary should not take steps to re-let the plot.
Transfer of sheds / greenhouses etc. to new tenants on termination.


The Notice of Re-possession (which replaces the old term Notice to Quit) gives a date by which the outgoing tenant must remove from the plot anything which he / she wishes to retain ownership of.
Any agreements between an outgoing tenant and an incoming tenant as to financial compensation for structures left on the plot are between the incoming and outgoing tenants alone.


Prioritising Plot Transfers over new tenants
Where a society is aware that a plot is becoming vacant, and where the society believes that that plot would be a suitable one to which an existing tenant may be transferred (either because they want a larger / smaller plot, or a greenhouse etc.) then the Society should inform the Council (via the monthly report) that they will be advertising the plot for transfer internally on the site. It is for the Committee to determine whether or not applicants are suitable for transfer. Suitable applicants should be ranked in order of their length of stay on their current plot. (An alternative proposal is to ask those tenants who are looking to transfer to a larger plot to re-register on the Waiting List (without surrendering their current plot) and to deal with transfer requests in waiting list order. This is similar to the procedures set out for inter-site transfers in earlier abas minutes – see abas minutes 08/06/2015 Item 1.2 on www.abas2014.blogspot.co.uk


A guiding factor is that the end of a transfer chain must still result in a vacant plot becoming available to a person at the head of the site waiting list.
The Mal-cultivation Procedure


There are three stages to the Procedure carried out by the Council and OMA societies.
Stage One
This is an informal stage –
A plot that is not being adequately cultivated, or has some other breach of tenancy, is identified.


IT IS IMPORTANT THAT RE-INSPECTIONS / PHOTOGRAPHS ARE AS CLOSE AS POSSIBLE TO THE DATE OF THE MONTHLY REPORT. MONTHLY REPORTS CAN BE SUBMITTED AT ANY TIME OF THE MONTH PROVIDED AT LEAST 30 DAYS HAS PASSED SINCE THE LAST REPORT.
IF A SECRETARY IS IN DOUBT AS TO WHETHER A PLOT IS IN A SATISFACTORY CONDITION THEN ADVICE IS TO SUBMIT A STAGE 2 REQUEST AND LET THE COUNCIL OFFICERS MAKE THE JUDGEMENT

ABAS ADDITION
NB – the Council will not action any new requests for BoT letters after the submission of the September monthly report until April 2017. Any cases already at Stage 2 will continue.

In abas’ opinion secretaries would be advised (in say Feb/March 2017) to:
·         Tell all plot-holders on their site that there will be a site inspection on xx/April/ 2017 (this might be amended dependent on weather etc.)
·         Inform all plot-holders that if they are experiencing problems in bringing their plot up to an acceptable level of cultivation for that date they should contact the Committee to discuss the matter
·         If, at the stated inspection date, a plot is not at a suitable level of cultivation (particularly if the tenant has not been seen to be actively engaged with their plot by that date) then the Committee should list that plot at stage 2 and invoke the Mal-cultivation procedure.
·         From April to end September the normal mal-cultivation process should be followed.


Abas’ Report to Members on Fires on Plots


It was agreed that there are essentially three ‘documents’ which define the regulations about fires on plots.


Para 13 of the current Tenancy Agreement states that a tenant may have a fire but that he / she must not ‘cause a nuisance’. Therefore it would seem logical that if a tenant has (or repeatedly has) a fire which causes a nuisance then this is a breach of tenancy and that tenant could be issued with a BOT2 or potentially Notice of Re-entry. The decision whether to apply this will lie with the Council
However it has been asserted that whether a Statutory nuisance is being caused or not can only be determined by a court under the Environmental Protection Act 1990. This requires action from the Environmental Pollution Unit at Bolton MBC.


A letter issued on 19 March 2014 by Neighbourhood Services which states that the Environmental Protection Act 1990 applies to fires on allotment sites.


An advisory note issued by Environmental Services in March 2014 stating that section 79 of the Environmental Protection Act applies and setting out the potential penalties to individuals of causing a nuisance.


It was also reported that following complaints about fires at one particular allotment site, the Council is giving consideration to introducing a blanket ban on fires on allotment sites. (This would undoubtedly require an amendment to existing Tenancy Agreements, this could be done in conjunction with sending out the annual ‘bills’).  Abas would urge all members to follow local guidelines about avoiding causing nuisance so that such a draconian step will not be taken.


Multiple-Plots at the same address


The question had been raised about a situation where unrelated people shared an address (essentially about ‘houses in multiple occupation’). There has never been a case where applications from such persons has caused a problem. Provided they are genuinely separate households then each may apply for and be granted a plot.


There had been a report that the Council was reviewing its policy about the keeping of bees on allotment sites. The Council is not currently reviewing arrangements and there is no ‘policy’ as such. The Council’s ruling is that anyone wishing to keep bees must have attended a recognised bee-keeping course and be able to produce the required insurance documents BEFORE placing a hive on site. On the positioning of hives the Council would recommend that the guidelines set out in the relevant NSALG leaflet be followed, but each individual application would be examined on its merits.


A programme to control JKW has begun at Settle Street.
At Dealey Rd. (and at Settle Street) the Council is contacting the adjoining landowners to advise them of their responsibilities in the eradication of JKW.


On other sites it is recommended that Societies conduct a twice yearly programme of cutting and burning and the application of a glyphosate  weedkiller for a period of two years. This should make a major impact.


There are issues about the definition of a bonfire – this covers a range of events from simple burning of scrap wood, dried weeds etc. by one or two plot-holders acting together to an event to which the public are invited (and possibly charged) and at which fireworks are set off.


Council opinion is that there should be NO public events on allotment sites after dark. It is felt that sites are unsafe places.


Therefore any (Nov 5th-style) bonfires must be restricted to plot-holders and their guests, and plot-holders must be made aware that they are personally responsible for the behaviour and safety of their guests.


In order to have a bonfire a society should


·         Provide either a risk assessment or an event management plan


·         (On this point one local site consulted its insurers (Bluefin) to find that a clause had been inserted in their public liability insurance policy namely that they must inform both police and fire brigade at least 14 days before the event and follow any recommendations that they made – there were also specifics about a safe space around the fire and an absolute ban on fireworks. We would therefore advise all societies to check with their insurers.)


The Council has also stipulated that NO additional material may be brought onto the site for the purposes of the bonfire. 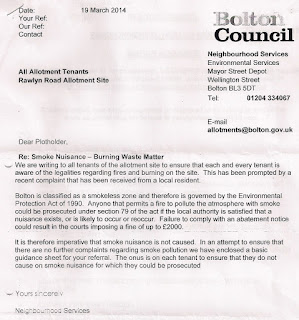 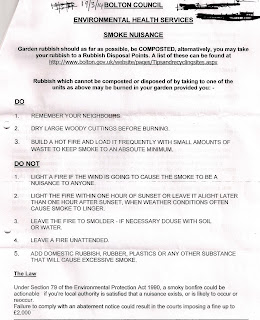 A number of individual society matters were discussed and these will be fed back to the relevant secretaries asap.