Minutes of the September Meeting


The minutes of the September meeting having been posted on the abas blog-site, the Committee moved that the minutes be accepted.


Following the September meeting the Committee emailed Mr Russell with Regard to a Meeting between Abas members and Mr Russell and the relevant elected member at Bolton MBC.

On 14/10 we aim to discuss the matters raised by the July and August meetings (fires on plots, multiple plots at same address, Bullying and Aggression on sites, Mal-cultivation notices). Settle St have requested that Council policy about bee-keeping on allotment sites be added to that list. Lever Park have also requested other items to be added. At the 10/10 meeting Rawlyn Rd raised an issue about their waiting list, and Moss Lea about delays in answering monthly reports.


Based on the replies received to the survey done by Jeff, abas would make the following points
The April 2014 version of the Tenancy Agreement states (clause 13) that

It would therefore seem logical that where a plot-holder / tenant causes a nuisance by having fires, then this represents a breach of tenancy. However it has been asserted that a nuisance can only be proved though a court. Hence the following documents 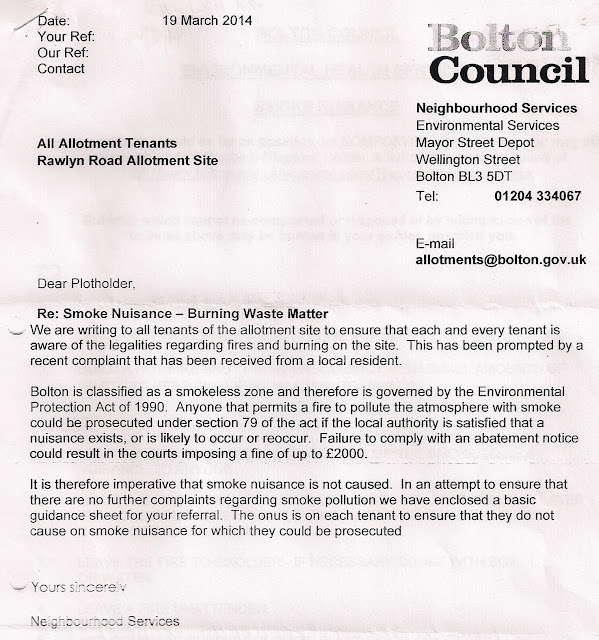 This letter was accompanied by the following advisory note 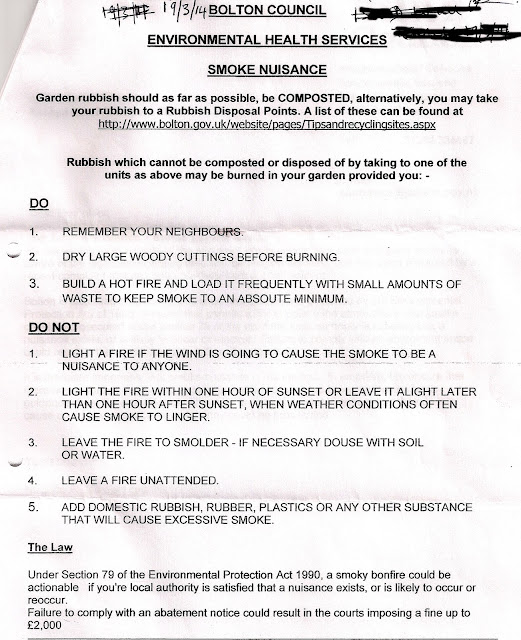 It is important that tenants work together with Societies to prevent nuisance fires. If complaints rise again there is pressure on the Council to introduce a blanket ban on fires on allotment sites.


There are general issues about mal-cultivation notices but the position does not seem as dark as suspected after the Sept meeting
A key point is that the Council will ONLY act on information in the Monthly report
Most sites are solving most problems at Stage 1 stage with informal warnings to plot-holders.
Regular site inspections act as an incentive to plot-holders
Site secretaries need to be aware of opportunities to organise help for some tenants or to look at plot transfers and / or plot-splitting


The Mal-cultivation procedure was a major item on the agenda for the 14/10 meeting.
It was subsequently discussed and an amended statement of the procedure agreed which once ratified (hopefully by 21/10/16) will be posted on the abas blog-site


Abas subs
Abas subscriptions for 2017 are now due and are being collected by the Treasurer (Terry Farrell).
Subscriptions are at the agreed new rate of £1.00 per member


A Council Officer visited the site, assessed the situation and within a week council staff had effected site road repairs and filled potholes between the car park and the disabled person’s plot.
The Council will be returning to make repairs to the road from the gate to the car park.
Harpers Lane have also acquired two loads of cold planings and are organising a volunteer weekend to use these to fill more potholes.


Any Other Business / Date of Next Meeting


Cllr Susan Howarth – Cllr Howarth has tabled a motion relating to local food growing for the Council meeting on 13th October. Once we know more we will contact Cllr Howarth to discuss her initiative.


Bottle Digger – Tonge Fold are suffering intrusions by people coming on site during the hours of darkness and digging on plots in the hope of finding Victorian bottles. The diggers have left large craters on some plots and damaged / destroyed growing crops.