AUGUST 10TH
Abas was honoured to have the Mayor of Bolton, Councillor Carole Swarbrick, as our guest at Astley Bridge Cricket Club on 10th August to present the Trophies in the annual allotments competitions.
The Fairhurst Trophy for larger allotment plots went to R & J Dyson of Sapling Road Allotments Society. The photo below shows Mrs Dyson collecting the trophy 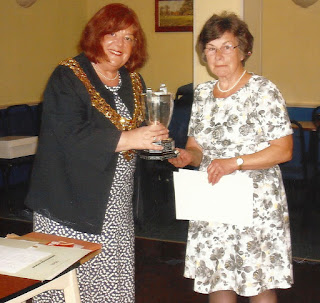 The Greenhalgh Trophy for the best smaller plot went to Mr and Mrs Marsh of the Nasmyth St. site in Horwich. The photo below shows Mr Marsh collecting the trophy. 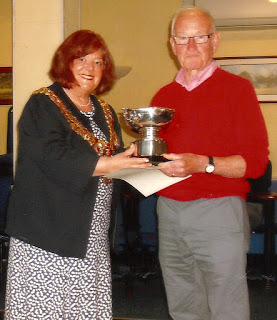 The New Tenants Trophy for the best plot where the tenancy had been held for less than 12 months went to Mr and Mrs Buckley of Harpers Lane Allotments Society. The photo below shows Mr and Mrs Buckley collecting the trophy from Cllr Swarbrick. 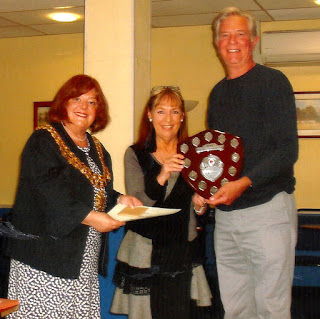 The judging panel also gave a Highly Commended Award to Mr D Hargraves of Harpers Lane Allotments Society for his efforts in bringing back into cultivation an abandoned and flooded plot.
The photo below shows Mr Hargrave receiving his certificate. 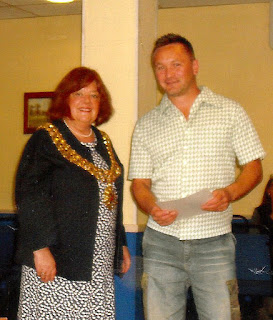 And finally Abas’ own award for the best SITE, the Rosebowl, went to Florence Avenue. The photo shows their Secretary, Mr P Warren, accepting the trophy from the Mayor. 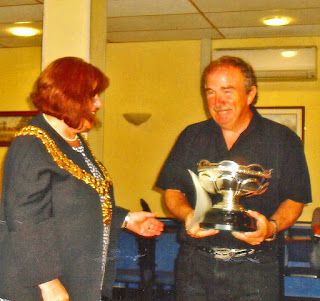 We’d like to thank everyone who took part in the competitions, our judging panel (Terry Farrell, Jeff Gibson, George Wilde and Richard Heyes) for making the rounds through June and July, Mrs Margaret Farrell for making the presentation cakes, the staff and Committee at Astley Bridge Cricket Club for hosting the event and most of all, the Mayor of Bolton, Cllr Carole Swarbrick for presenting the prizes.
Following the presentations and the Mayor’s departure, we had an open discussion session and Dave Waring of Tonge Fold Allotments reported to the meeting that his society had been told they could no longer sell surplus produce from a stall at the site gates.
This has since become something of a cause celebre in the town with regular coverage in the Bolton News.
Some members of the audience were adamant that plot-holders could sell surplus produce. The Secretary reported to the meeting that he had received an email from Malcom Russell which restated that the Council were content with societies selling a small amount of produce to raise funds for the society at Annual Open Days and similar one-off events, but that this did not extend to regular sales from a stall.
The Committee undertook to contact both the Regional Association (NWCAA) and the National Allotment Society’s Legal Officer (Liz Bunting) to get a clear, informed opinion as to the position with regard to the selling of surplus produce.
The Secretary spoke to Ms Bunting on Tuesday 18th August and gained a clear picture of the NAS’ interpretation of the position. This was followed up by a written opinion. The secretary will present this to the meeting on 14/09/2015.
The issue again highlights the importance of addressing how work under OMAs and how work to improve site amenities is to be financed. This will be placed on the agenda for 14/09/2015.